We would love to have you join us this Sunday!

A weekly email sent only to people who request it online that will keep you up-to-date on happenings at Oak Springs! 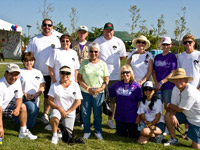 Thanks for visiting our website! Oak Springs Community Church is a group of believers dedicated to loving God and the people in our lives, for His glory. Our mission is to get the good news of Jesus Christ into the lives of the people we live with, work with, play with, and interact with. These relational connections we have are the ‘live wires’ God uses to transform lives! We hope that your visit here will be inspiring.

We meet together on Sunday mornings for worship and study of God’s Word. We welcome you to venture out to Grand Isle Senior Apartment Homes in Murrieta each Sunday at 11:00 AM to experience God in worship and to study God’s Word with us as we equip one another with the truth.

To say, “our doors are always open” would be a little misleading, for our “doors” belong to the Grand Isles. But it is an understanding of Oak Springs’ that we are ‘open doors’ to the love of God and His grace by the sheer fact of His open arms to us. We’ve been embraced by our Heavenly Father and we are just one of many of His open doors to the world He loves and gave His only begotten Son to rescue. So, we welcome you with open arms!

… and I have always been fascinated by this one comment found in John’s gospel that is unique to an event that is recorded in all four gospels.  It was the account of Jesus’ arrest in the Garden of Gethsemane.  He was there with his disciples after He had spent the evening with them in the Upper Room.  All four gospel writers agree that Judas arrived at the garden with a crowd of armed men to arrest Jesus.  And a variety of details are shared by two or more of the historians.  But one of the most intriguing comments in all the New Testament was this one in John’s account, “When Jesus said, ‘I am he,’ they drew back and fell to the ground.” (John 18:6).

Matthew alluded to this power at Jesus’ disposal, mentioning 12 legion of angels he could have called upon to fight off the aggressors, but only John recorded the knocking them to the ground.  All four writers mention Peter’s swipe at one of the men with his sword, cutting off his right ear, obviously missing his entire head, but again, it is John’s observation that captures my curiosity.  What was it about Jesus that frightened the armed mob so much that they fell to the ground?

It has been said that John’s gospel is the eagle because of its view from the heavens, recording more of the spiritual scene than the other gospels.  Perhaps this is one of those verses that fits the description.  All I can think is that Jesus was so confident in His mission to rescue mankind from the sin that separated them from God that He showed Judas who betrayed Him, the Jewish leaders who accompanied the mob, the armed men who would man-handle Him before He was nailed on the cross, and His disciples who would run away from the scene, that He was in complete control of His power… a power that no earthly force could stand against.

This is the powerful Savior that I put my confidence in when evil opposes me, or that informs my faith when I say to anyone who is being troubled by evil or the circumstances burdening them, “trust the Lord, He’s got this!”  It is certainly not self-confidence that informs my faith, rather confidence in the One who, after showing a glimpse of His omnipotence, gave Himself to the crowd led by His friend Judas and humbled Himself to death, even the shameful death on the cross.  But God raised Jesus from the dead, not only defeating the evil one and his orchestration of violence to kill Jesus but defeating death itself!  I know that all my work (teaching the Word of God through the ministry of Oak Springs Community Church and being present in the lives of hospice patients and their families through the work of Hospice of the Valleys) is informed by my trust in Him who modeled such self-control.  Wow!

You can get our weekly email newsletter by
Signing up here!
Oak Springs Community Church